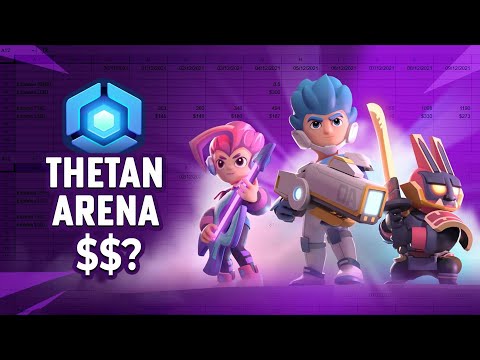 A real breakdown of play to eearn game Thetan Arena. From day one for three weeks.


Transcript:
So a lot of chitter chatter on YouTube and TikTok on how you can make 10, 20 even $100 per hour playing new play to earn game Thetan Arena. But I don’t trust, I verify. So I kept records on my earning journey from the first day of Official Public Release of Thetan Arena to today, 3 weeks in.

And I’m not going to make you watch the steps and the spreadsheet that follows, I’m going to tell you straight up. -$916 is how much you can make. You can’t make money, at all. It will cost you. The current tokenomic setup and cost to play with a mid level character will cost you, a lot.

This doesn’t mean things can’t change. With future changes to the game, tokenomics and incentives it might actually start to generate income. But this also makes this game highly centralized. I’m also not talking about the game play itself. It’s actually a really well made game, very addictive, and I found myself just playing for fun and to improve my skill even when my characters earning capability had depleted for the day.

Let’s go through this. First, you have to buy a character that has earning potential. The hype was so big on release that the price of everything shot up on the day so it cost me $1000 USD to buy my first character (and that was after shopping around and it was even less than the random boxes at the time) to counter this the makers WolfFun offered a half price box five days after launch for those that bought in on day one. I took advantage of this so I didn’t just have one character and this cost me another $300.

Other things you should know. You have to wait a couple of weeks to withdraw after starting. There’s also 4% fee to withdraw and minimum of 750 gTHC. And to be honest the tokenonimcs currently seem designed for price to go down because everyone just cashes out as soon as they can 🙁 and gTHC is an unlimited supply with limited utility. They are working on a burn mechanic on buying back coins from their internal earnings, but it’s still not healthy right now.

On a balanced game with matched player skill levels you should win around 50% of the time.

When I first started playing one of the first Play to Earn games Axie Infinity the earnings weren’t that dissimilar. The earning capabilities were like $10 a day. But as things matured, utility increased, more players flocked in. The value of the characters I had initially bought and the AXS I had earned had multiplied 20x when I sold 6 months later. So in 6 months time things may also mature with Thetan Arena and extra utility may be added to my existing characters, you never know. But as it stands today, it will cost you $20 per hour to play.