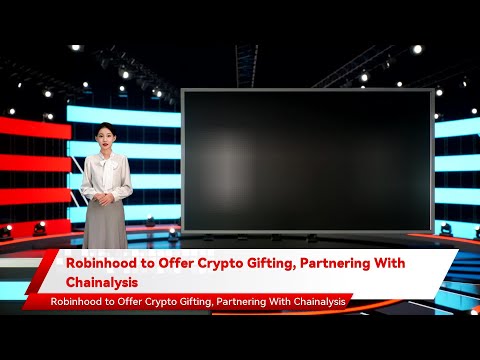 Robinhood Markets is developing a feature that will enable users to send cryptocurrency as a gift, in addition to partnering with Chainalysis.The feature was discovered in the beta version of the Robinhood app by developer Steve Moser, which was then shared with Bloomberg. In addition to sending cryptocurrency through digital gift cards, the code revealed that each can include a message up to 180 characters long. Users will also have the ability to retract sent crypto gifts before they are accepted by the original intended party. Other features revealed by the code include the ability to receive direct deposits early and automatically invest spare change. Consumers obviously lack access to these prospective utilities, but similar discoveries in the past have uncovered features that were later introduced into the app, such as support for crypto wallets. It is unclear when Robinhood intends to unveil the crypto gifting feature, as the company declined to comment on the revelation.Meanwhile, in order to meet increasingly augmenting compliance standards Robinhood recently partnered with blockchain data platform Chainalysis. Robinhood intends to leverage Chainalysis’ comprehensive data and tools such as real-time monitoring and investigative solutions “to help their compliance teams build trust, keep accounts safe, and expand their cryptocurrency offerings.”Robinhood will utilize Chainalysis KYT and Chainalysis Reactor, which leverage Chainalysis data to manage a broad range of compliance needs. While Chainalysis KYT flags transactions that appear risky or illicit in real time, Chainalysis Reactor will enable deeper due diligence into any potential suspicious activity. With these tools and a simple API integration, Chainalysis will also reduce manual workflows for Robinhood by providing it with access to the same blockchain data government agencies use and integrating it into their systems. Chainalysis will also provide certification programs for Robinhood employees, ensuring that teams are up-to-date with relevant subject matter necessary to operate a cryptocurrency business responsibly. The partnership comes just ahead of the anticipated launch of Robinhood’s crypto wallets, which currently has a waitlist of over 1.6 million people. What do you think about this subject? Write to us and tell us!

CRYPTO TIPS | IS THE BITCOIN ETF GOING TO TANK THE MARKET? (WATCH ASAP)

CRYPTO TIPS – ETHEREUM MICROSOFT & WHY ETH IS THE LEADER (FOR NOW).