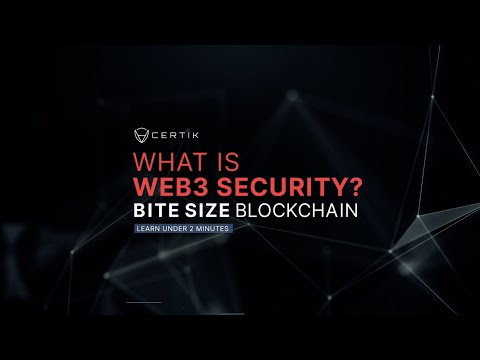 #web3 #web3security #blockchain #certik
What is #Web3 Security?
While you’ve definitely heard about web3, how much do you really understand? Check out our video and learn about what web3 is, security issues, and ways to alleviate them in 1 minute: https://certik.com/resources/blog/61IYiqqASgw9kA5BsmaqKa-what-is-web3-security


Transcript:
Web3 is a conceptual shift in the way that the internet is organized, with companies moving away from centralization to more decentralized structures, allowing users more control over their data.

Web3 resolves many of the vulnerabilities in web2 technology, but it also inherits many of its problems.

Anonymity and privacy are fundamental to web3 security. However, anonymity allows hackers to conduct attacks by obfuscating their identity. CertiK’s Skynet and SkyTrace help by anticipating, tracking, and visualizing attacks on the blockchain. CertiK’s KYC verification fosters trust between investors and project teams while working to improve web3 security without the need for governmental intervention.

Transparency makes it harder for projects to conduct underhanded activity out of sight, but it also makes a project’s code vulnerable to exploitation. CertiK’s smart contract security audit analyzes a project’s code and offers solutions to correct the flaws.

Centralization risk has been identified as the most common attack vector. As more projects make the shift to decentralized practices, those that delay fixing such vulnerabilities risk being targeted by hackers.

My fastest explanation to “what is web3?” #web3 #crypto #cryptocurrency